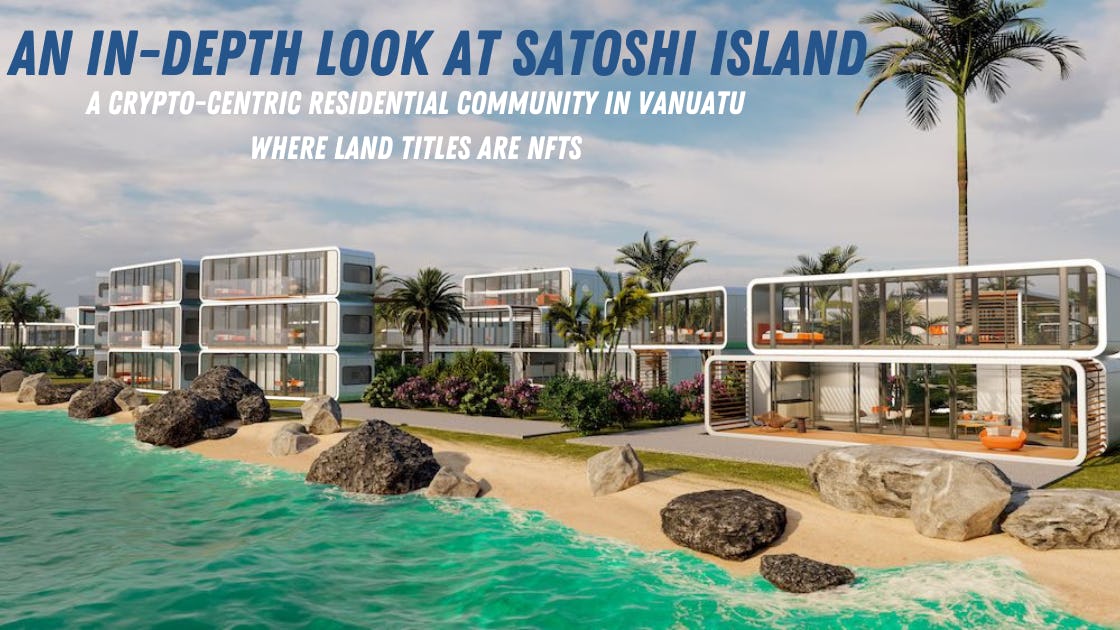 According to reports, there’s a 32 million square-foot island located in Vanuatu that’s in the midst of being constructed into a crypto-centric residential community by the island’s owners: Satoshi Island Holdings Limited. So far, more than 50,000 individuals have applied to live on Satoshi Island, and land rights will be minted in the form of non-fungible token (NFT) assets.

After Construction Completes, Satoshi Island Aims to Be the ‘Crypto Capital of the World’

There’s an island located in Vanuatu, between Australia and Fiji, that’s currently being transformed into an island for cryptocurrency and blockchain advocates. Vanuatu is an archipelago that consists of 83 islands that originally stemmed from volcanic impacts.

Reports in the past show that farmland was being sold in Vanuatu for bitcoin (BTC) over six years ago in 2016. The nation of islands’ government is well known for being crypto friendly. Satoshi Island is also selling land in Vanuatu, as the region aims to develop “into a real-world crypto economy and blockchain based democracy.”
The website explains that the island is owned by Satoshi Island Holdings Limited and the island’s goal is to become “the crypto capital of the world.” The company managing the project claims the island build has been given the green light by the Vanuatu prime minister and the nation’s minister of finance.

Planning and development of Satoshi Island is being provided by the architectural firm James Law Cybertecture. Satoshi Island architects are leveraging a modular development that the website calls “sustainable smart building.” Module living units can be positioned any way the owner wants and they can be combined as well.
Modules are built off-island and shipped to Vanuatu, and when they arrive and are placed into position, island residents can officially move in. Satoshi Island Holdings explains that the team chose the nation of Vanuatu because the “government supports innovation and has crypto friendly laws.”

Satoshi Island will be built with sustainability in mind as the island’s power systems will utilize renewable energy methods. So far, there’s been a lot of interest in the crypto-focused island, as reports disclose that the company says 50,000 people have applied for residency.

Satoshi Island Land Titles Will Be Minted in the Form of NFTs, Island’s Public Opening Estimated to Begin in Q1 2023

Additionally, interested residents will purchase their land titles in the form of a non-fungible token (NFT). The company fully understands that “owning a Satoshi Island NFT requires a level of responsibility not usually associated with NFT ownership.” So beneficiaries will be used similarly to a last will and testament.

“Beneficiaries are applied to all Satoshi Island NFTs and holders are required to confirm wallet access periodically by calling a function in the smart contract,” the website explains. If an unforeseen circumstance occurs to the landowner the firm says:

If they cannot [call a function in the smart contract], their beneficiary will be able to claim their NFTs to ensure the assets are not abandoned. In the event that no beneficiary is set, the NFTs will be subject to a decentralized redemption period of 12 months, where previous owners can retrieve their NFT if a mistake was made. Once lapsed, NFTs will be the responsibility of a DAO controlled by the Satoshi Island community.

In addition to the land NFTs, Vanuatu citizenship will cost roughly $130,000. The island will be open to 21,000 crypto residents when the region officially opens to the public. Modular construction begins in the third quarter of 2022, and by the fourth quarter, a private opening for verified citizens of the island will be held. Satoshi Island Holdings estimates that the public opening will take place in Q1 2023 and residents can live in their homes for short and long-term periods and rent them, too.

The firm is also interested in startups and established companies setting up shop on the island. “Companies of all sizes are welcome and we have dedicated co-working space to suit start-ups, all the way up to entire campuses where large projects can build satellite offices, company retreats, or even permanent headquarters,” the website details.

While some reports indicate 50,000 applicants have applied to live on Satoshi Island, other reports have said: “80,000 people have already applied to receive NFT citizenship on Satoshi.” That claim is according to the Sydney-resident and operations and logistics director for Satoshi Island, Denys Troyak. The report published by ABC interviewing Troyak said that the Vanuatu Financial Services Commission (FSC) put out a press release saying that it had not granted licenses to Satoshi Island.

The FSC press release has since been deleted from the web, but was saved on archive.org. However, three days ago on March 25, 2022, Cointelegraph’s Joseph Hall reported that the Vanuatu Financial Services Commission has officially approved the Satoshi Island residential community project. Hall writes that Bob Loughman, the prime minister of Vanuatu, has “officially given the green light to Satoshi Island.” In the report written by Hall published on Friday, the owners of Satoshi Island are also quoted as saying:

With this full endorsement from the prime minister of Vanuatu in hand, we can show everyone that Satoshi Island is as real as it gets, and the kind words of the PM inviting our community to their home could not be a warmer welcome.