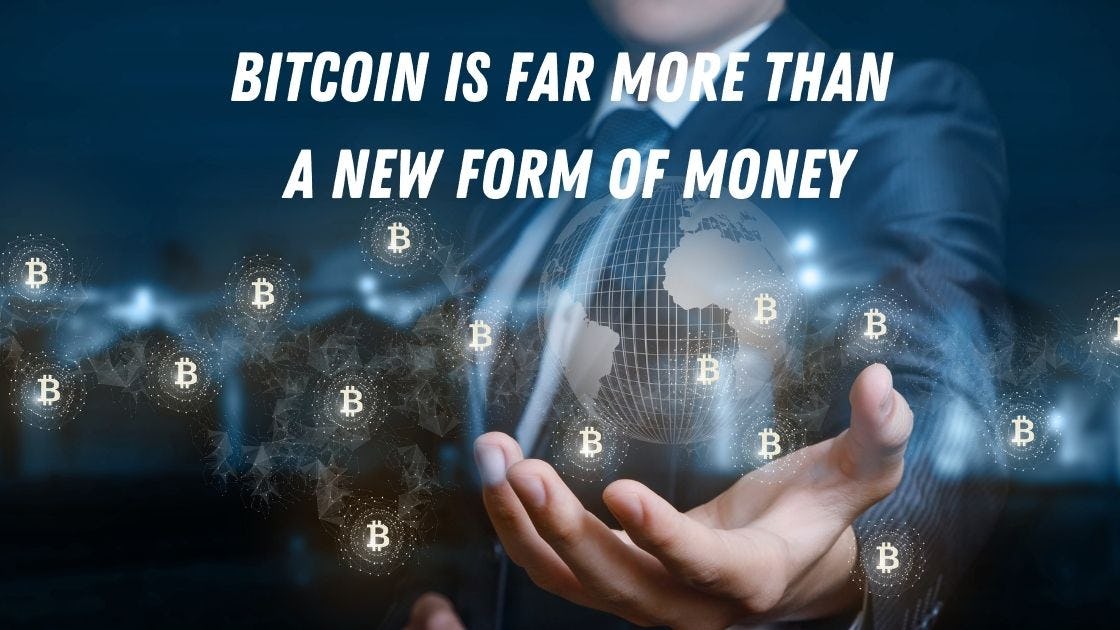 Bitcoin Is Far More Than a New Form of Money

Bitcoin Is Far More Than a New Form of Money

This is because Bitcoin’s native monetary policy is elegantly simple, and its immutable supply is free from human discretion, something no other money has had since gold. In contrast to the yellow precious metal though, Bitcoin's monetary policy is algorithmically determined and thus perfectly predictable, rule-based. It is neither event- nor emotion-driven.

By depoliticizing monetary policy and grounding it in a code that follows a strict formula, Bitcoin’s monetary asset is structured as neutrally as possible. Bitcoin is truly sound money since it provides the highest degree of stability, reliability and security as a monetary system.

A base layer for money

Because this new form of global, digital money resides on a base layer, it’s more apt to speak of Bitcoin’s asset as being base money. This base money is being settled in a distributed fashion on Bitcoin’s blockchain, which acts as the final settlement network within Bitcoin’s native, global monetary system.

So, Bitcoin the base money – also known as on-chain bitcoin or BTC that is settled on Bitcoin’s blockchain with finality – is really “just” the first or base layer for a rapidly evolving multi-layered financial order.

This all-important nuance was already clear to Bitcoin's anonymous founder, which is why he chose his terms carefully in the Bitcoin whitepaper. Satoshi Nakamoto described Bitcoin as an electronic cash system – a subtlety that many have unfortunately missed to this day.

In hindsight, Nakamoto probably should have emphasized the term cash, as it carries a distinct meaning within monetary theory. Coming from the old French word casse, which means money box or money in hand, cash is defined as a bearer asset that is typically used to settle money transactions. It is therefore a base money asset. So, I believe that Nakamoto intended to introduce the Bitcoin blockchain as a base settlement infrastructure for a blockchain-native base money.

Financial logic on top of Bitcoin

While most people are familiar with Bitcoin’s monetary layer, what goes unnoticed by many is Bitcoin’s rapid development into a financial ecosystem. The reason is that this new system is not directly built into Bitcoin’s protocol code itself.

This quality contrasts starkly from so-called smart contract platforms like Ethereum, Solana, Avalanche, Terra or Binance Smart Chain. While these fully programmable blockchains – technically called Turing-complete systems – allow for native smart contract compatibility, Bitcoin’s programming languages script has been intentionally limited. By not going for full programmability on its base layer, Bitcoin has been optimized for stability, reliability as well as security.
With Bitcoin, the implementation of financial logic of any kind has been offloaded to a second layer within its multi-layered financial system. This layer is now populated by sidechains like RSK or Mintlayer, second-layer protocols like the Lightning Network, or alternative layer 1 blockchains like Stacks that run parallel to Bitcoin and have their own history of transactions on Bitcoin.

These different approaches make up the building blocks of what I call the infrastructure layer within Bitcoin’s financial system. Its purpose is to enhance Bitcoin’s expressive power in some form or another. Meanwhile, this layer is a layer of its own. This way the monetary layer can provide the essential assurances for a sound monetary base asset, while the expressive financial logic in the form of smart contracts is moved off Bitcoin’s blockchain onto the infrastructure layer higher up the stack.

Free-market for innovation on Bitcoin

Bitcoin’s infrastructure layer is spawning a free-market competition for building a financial system on top of Bitcoin. This competition is beneficial to users as more qualitatively different options mean more freedom of choice. So, the bigger and more diverse the DeFi ecosystem on Bitcoin, the better.

Regarding consensus and security, users must remember that all projects accept some tradeoffs. Because the different protocols do things differently, these tradeoffs will differ by project. This variety also benefits users, who can opt for the options with which they feel most comfortable.

The myriad decentralized applications will make up the fourth layer within Bitcoin’s multi-layered financial order. Token swaps, leveraged trading, collateralized lending, uncollateralized lending and more are all emerging as a feature on top of Bitcoin. Depending on what infrastructure setup users prefer – be it RSK, Liquid, Mintlayer, or any other that has yet to emerge – they can choose freely.

Wallets play a decisive role in this monetary system. Digital wallets that allow interaction with Bitcoin-powered services like Muun, Hiro, Liquality or with Ethereum-based MetaMask are to blockchains what browsers are to the internet. They allow users to easily access the underlying technology.

As the fifth and highest layer, wallets come most naturally to users and complete Bitcoin’s multi-layered financial order. The higher up the stack we move, the more room for innovation and development there is.

As we have seen throughout this three-part mini-series, DeFi on Bitcoin is alive and progressing well. While it is still underdeveloped compared to the rest of DeFi, chances are that DeFi based on Bitcoin will grow.

After all, many more Bitcoiners might look for a place to use some of their Bitcoin stash to conduct their Bitcoin-powered finances.