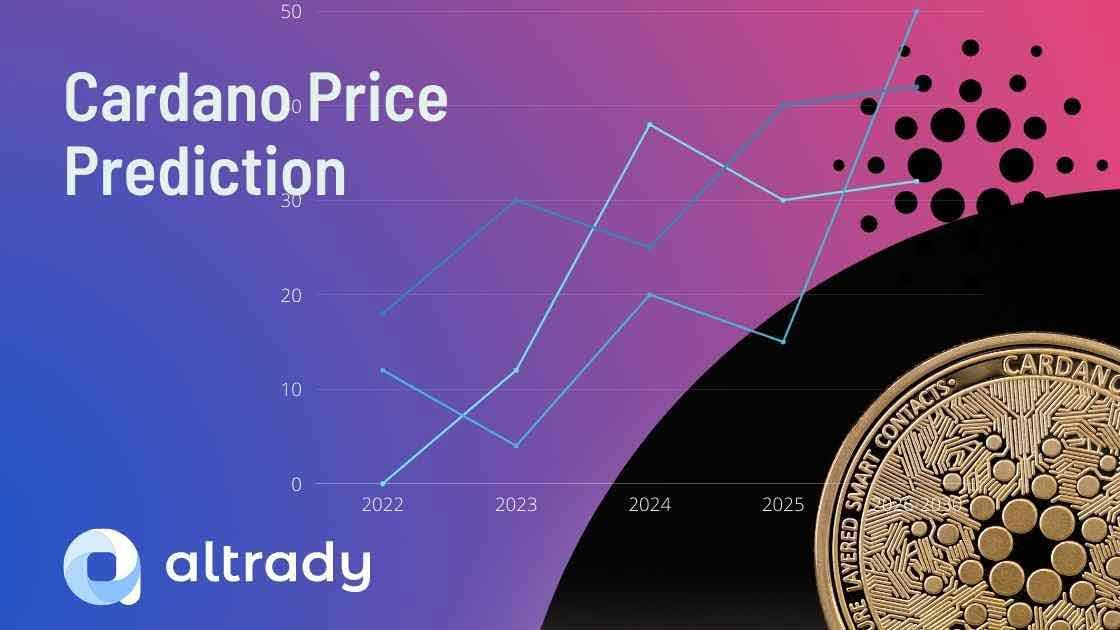 Cardano Price Prediction (ADA): Is it a Next Bitcoin or Ethereum?

Altrady Blog/Cryptocurrency/Cardano Price Prediction (ADA): Is it a Next Bitcoin or Ethereum?

Cardano Price Prediction (ADA): Is it a Next Bitcoin or Ethereum?

Who can ignore the supremacy of Bitcoin and Ethereum in the cryptocurrency world? What about the platform with more features and potential than these two giants? Sounds silly, but the impossible has been possible now. Cardano is now at the driving seat of the crypto world and doing wonders with every passing day.

Cardano price prediction is the favorite topic of every crypto enthusiast, and they want to know more about this. Many exchanges have been accepted ADA at the time of launch, and others are trying to collaborate with it. Over this, Cardano has started many other projects and will rise as a world-renowned brand.

In this article, we deeply study the price analysis of ADA and explain its future. So sit back and understand more about this evergreen cryptocurrency.

Our January roundup of Cardano on-chain stats is here📈 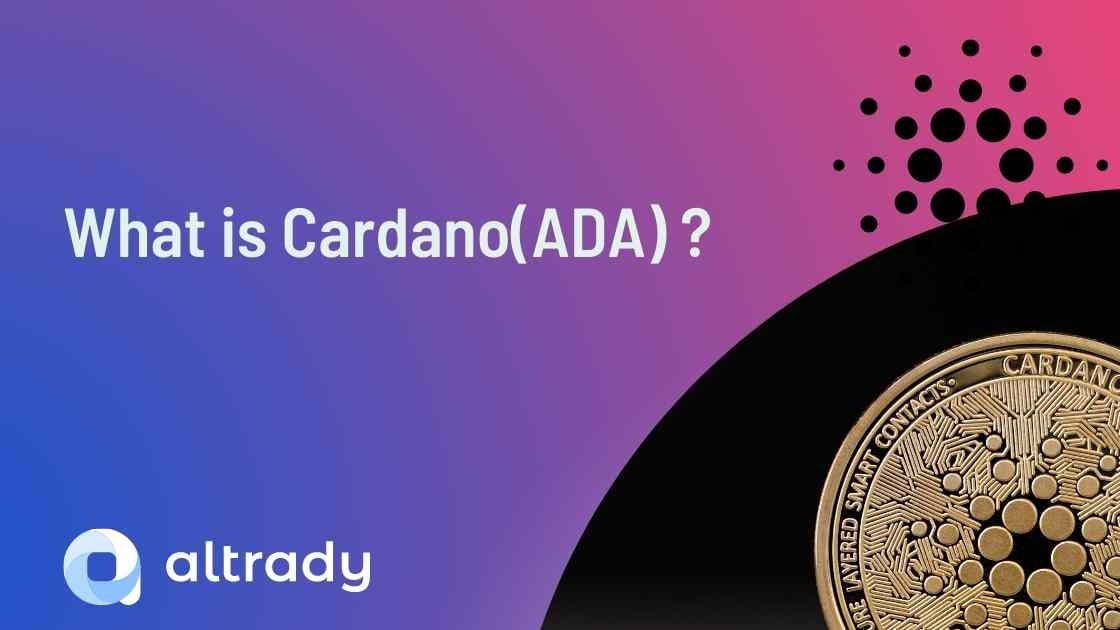 ADA is the native cryptocurrency, which now has a circulation supply of 45 billion and ranks at the third in the market cap. The purpose of the Cardano platform is to improve the transferring problems and investment space for crypto enthusiasts. However, it is more than cryptocurrency on which people are running their financial applications worldwide.

It is the first project in the history of cryptocurrency which is completely based on the research of worldwide scholars. On Cardano, no third party is involved in your transactions. The future of Cardano will offer a lot for investors, and the recent launch of Alonzo Testnet backs this fact. After this news, Cardano received massive support from investors and became a headline in the crypto world.

Moreover, the Cardano NFT marketplace got massive attention after the sudden surge of Ethereum gas fees. Recently many NFT artists partnered with Cardano because of its impressive features.

"With the ownership of the NFT, you'll have full control over the [17,420 carat] sculpture in the digital and physical world."#Cardano #CNFTs #NFTs #CardanoCommunity https://t.co/YuE4aVgEA9

This platform uses the proof-to-stake strategy to identify news blocks and validate the previous ones. Users can lock or stake their tokens on different nodes and create new coins through this system. Ultimately, they get the percentage of newly created currency as a reward. The selection of reward holders has been made randomly. But the chances of winning are more if you stake more coins in the pool.

Cardano platform is still in the process of improvement, and the developers revealed many plans to make it a leading cryptocurrency. The team followed a roadmap of five steps to achieve their goals in the future.

Byron is called a foundation phase of the platform, which was first launched in September 2017 to the general public. At that moment, the other two releases include ADA tokens and the Daedalus desktop wallet.

The next step of Cardano was providing a decentralization platform known as Shelley. In June 2020, investors became able to verify their transactions without third-party involvement. After this step, Cardano becomes more popular in the crypto space.

Goguen should say the revolutionary step of the Cardano in which smart contracts were introduced, and people started believing on this platform. It was officially announced in August 2021 with the name of Alonzo. At that time, decentralization applications were also available for investors.

To improve the platform's efficiency, the developers decided to divide the main blockchain into two parts. Creating sidelines to scale up the business was the main concern of Basho.

IOHK is the company that collaborates with Cardano to build future systems. The platform introduced a governance model where users can decide what they want in the future. This Voltaire model will be released in different phases.

Before digging deep into the future analysis of ADA price, it's essential to see the background of the token. So here, we analyzed the historical value of the ADA token since its launch.

At the launch time, Cardano invests $63M while developing its ICO. The benefits can be seen as the massive growth of the token during its first week, and the market cap hit $600M at the start of October 2017. The token got listed on many big cryptocurrency exchange platforms on this achievement. At the end of November, ADA coin received a massive boost, and the market cap reached $3.5 billion.

2019 was very unpredictable for ADA, and token saw many highs and lows this year. Starting from $0.05, the price dropped severely to $0.035 till February. But the investors showed interest, and once again, the price went crazy and touched $0.1. After that, the up and down pattern continued throughout the year and ended with $0.03 in December.

2020 could be a game-changing year for the ADA, but then Covid-19 stepped in, and the whole crypto market crashed. The token started the year with $0.03 and reached $0.06 in February. But the Covid outbreak sent it to $0.02 and disheartened the investors. However, the buyers still backed the coin, and it dramatically reached $0.17 at the end of 2020.

2021 was the year of ADA because a bullish trend was followed. The coin started with $2.4, which was another ATH. The reason was news spread around that said ADA is best for purchasing Tesla. But when smart contracts were announced, the coin got crazy again and hit another ATH at $3.08, which was a phenomenal success for Cardano.

At the time of writing, ADA has a $1.43 billion 24h trading volume and is currently traded at $1.04, which is decreased by 1% in the last one day. Moreover, the coin has been listed on many crypto exchange platforms and crypto-wallets. This price up to and down is normal in crypto trading, so we can say that ADA can cross many other market coins in the future. 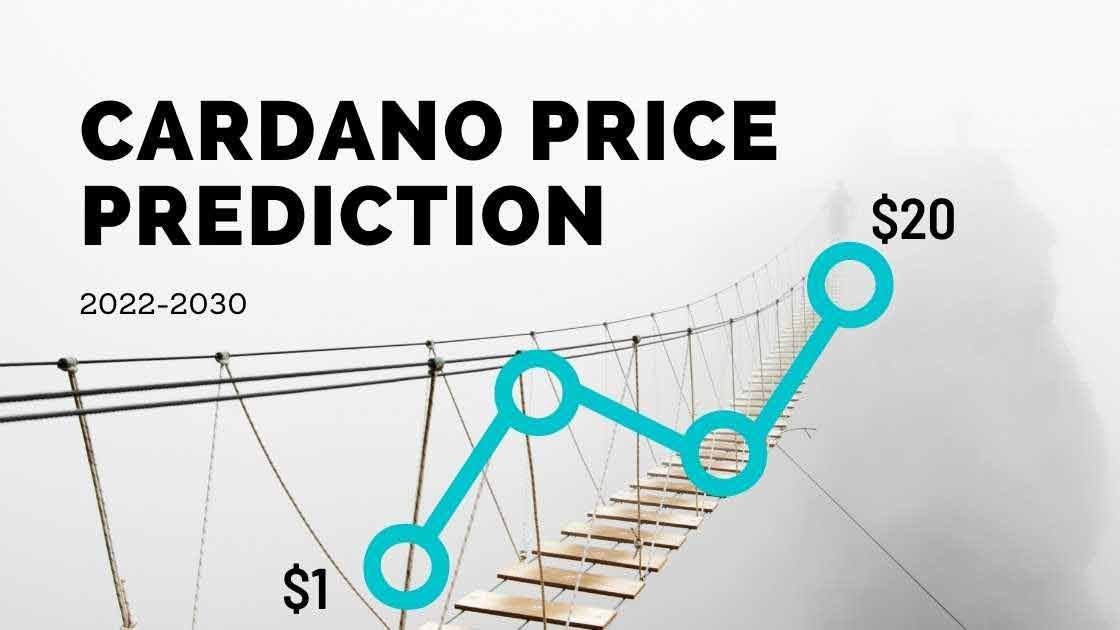 Cardano's future seems optimistic in many aspects. But no one is hell sure about prediction because the crypto is always in the swing of highs and lows. However, we have different artificial intelligence-based techniques to forecast the price. Also, the previous record of any cryptocurrency gives an idea about the future.

According to experts, the Cardano can touch the sky in 10 years. The situation can be reversed in case of an unexpected event like Covid-19. Considering the volatility factor, many questions arise in investors' minds. So, the following predictions are based on many factors, including crypto volatility. However, these forecasts are not hard and fast rules but give you a general idea of ADA future prices depending on the current situation and their plans.

After some unexpected price highs and lows, the experts are hopeful for the smooth trend of ADA in 2022. The starting weeks of the year were not supportive, but the coin still managed to retain the position of $1.04 and now going upward. If the investors start taking an interest in this token due to smart contracts introduced by the platform, the bullish trend can go upward and hit $1.9 in the mid of 2022.

The end of the year is not looking so bad as the price will manage to get stable at $2.298 after continuous fluctuations. The other side of the coin shows the downfall of the price if any new coin gets market attention. If the crypto leaders start taking an interest in ADA and debate its effectiveness, the prices will automatically rise and even reclaim its ATH position.

If we see Cardano one year later, multiple benefits pass in front eyes. The complete road map of the Cardano developers has not been implemented. Basho and Voltaire are still pending to be introduced officially. At the moment, only three steps are entirely executed, and investors start believing in this coin.

If those features become available in the next year and people start getting their benefits, the price of ADA will touch $3.44 at the start of 2023. And if the coin will able to get any celebrity's attention, the price even goes beyond $4.

One big hit, and everything went. That's a story of cryptocurrency and the fear of every moment. Even a single influencer tweet about the crypto can be a make or break for that particular coin. Many other factors are at the driving seat of crypto prices, and they can move anywhere.

But one thing which is a big plus for ADA token is the community support and investors' trust in it. If everything goes smoothly and no governmental or economic factor interferes, the prices of ADA in 2024 can touch $4-$5. But, of course, these are just predictions while being optimistic. The other end of the story is still possible, and brutal downfall can also happen.

2025 will be the judging year for ADA, as most of the projects will be completed then, and investors' support will also be evident. However, if ADA withstands all the hurdles and still manages to impress the audience, then no one can stop it from becoming the currency of the year, and prices would skyrocket to $6.

Cardano has started many side projects and is involved in many collaborations, expecting an upcoming big brand like Bitcoin and Ethereum. So, hitting the price landmark of $6 to $7 wouldn't be a miracle.

It's hard to forecast many years as many other cryptocurrencies will be in the market, and anything good or bad is possible. However, if ADA continues to provide the impressive feature and doesn't fail to surprise investors, we can say that 2026 to 2030 will be the era of ADA. If some factors support, the prices can go beyond $10 and even touch the $20.

What Does Expert Say About Cardano?

Some websites are giants of the crypto world, and experts analyze their data. So let's see what they say about the ADA future prices.

The Trading Beasts experts forecasted that the price of Cardano will fluctuate between $1.56 to $2.297 for at least the next two years. The average price between this period will not be less than $1.83.

Digital Coin Price is one of the most trusted platforms regarding the crypto future, and it is predicted that the price will soar up to $1.94 by the end of 2022. Optimistically, the prices will hit $4 by 2025.

Wallet Investor experts are highly hopeful about the positive trend of ADA and looking forward to seeing the $3.2 price point at the start of 2023. According to forecasts, the expected prices of ADA after 2025 will not be less than $6.062.

Pros & Cons of Investing in Cardano

Is Cardano better than Bitcoin & Ethereum?

If we consider technology development, then we can say Cardano is wonderful. But the market value of Cardano is negligible in front of these two giants. Cardano needs more investors and a market cap to upgrade its level.

How can you make money through Cardano?

Like any other cryptocurrency, the first way to earn a profit in trading. But Cardano has something more special to receive much more benefits, which is staking. No other platform offers to stake like Cardano.

Why is the price of Cardano so low?

Every cryptocurrency starts from zero, and prices are decided based on investors' demand. Cardano still needs to supply more ADA tokens and attract a large community.

If you are thinking about investing in ADA, make sure you have thoroughly covered the above information. Cardano can do more wonders in the future if paths are clear and no natural disasters happen in the next years. Since the features they launched and planning to introduce simply superb, so chances of positive price trends are maximum. Apart from this information, we recommend studying some statics by yourself and evaluating the crypto charts before investing.