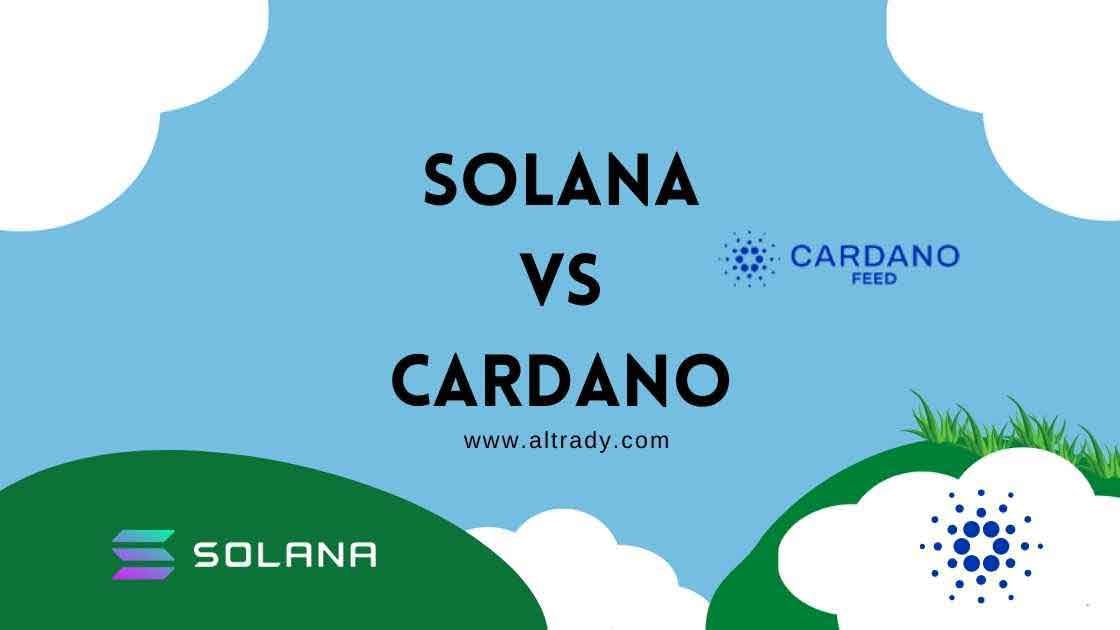 Solana Vs Cardano: Which Platform Is Good for Cryptocurrency Trading?

Solana Vs Cardano: Which Platform Is Good for Cryptocurrency Trading?

Just when you think you have one crypto trading platform figured out, another one pops up and leaves you scratching your head. Solana and Cardano are two platforms that have been garnering a lot of attention recently. So, which one is better for trading?

In this blog post, we'll take a look at the key features of each platform and compare them head-to-head. By the end of it, you should be able to decide for yourself which platform is right for you. Let's get started!

Solana Vs Cardano: A Brief Overview

The Proof-of-History mechanism developed by Yakovenko addresses one of the biggest problems faced in cryptocurrency - lengthy transaction times. This is what led him to create Solana, which has been deemed revolutionary for crypto with its new validation method. Now it’s way faster than Bitcoin or Ethereum's current systems.

When Solana blockchain started becoming popular for its revolutionary approach to cryptocurrency validation, it became something worth noting. With the Solana blockchain, transactions are validated in a whole new way. The goal of any successful coin or token should be useful and scalable enough that people want to use them in their everyday lives because if not then what's the point?

Solana is a fast, efficient blockchain that can handle 50k transactions per second (TPS). On contrary, Ethereum takes 10-15 seconds to process one transaction and has only 15 - 45 TPS, and even more, the Solana NFT marketplace had grown due to this powerful blockchain. It also has some well-known backing in the form of Andreeson Horowitz which means there'll be more money coming into Solana soon enough too hopefully. For those reasons alone you should check out this speedy platform that was released in April 2019.

Cardano is a blockchain with smart contract capabilities and a decentralized app (DApp) development environment. It was launched Ethereum by a co-founder in the quest of creating something more environmentally friendly than Ethereum for contracts and DeFi transactions on their platform. And all this without sacrificing performance or efficiency.

In September 2021 they announced plans about adding non-fungible tokens. This feature will provide users with even greater protection against data manipulation. Thanks to Proof of Stake consensus algorithm where blocks are added every 3 seconds rather than waiting 30+ minutes like Bitcoin does at present time.

ADA is a Cardano’s native cryptocurrency that was named after Lord Byron’s daughter. The coin serves as an open-source blockchain technology created to improve existing payment systems. Also, it makes them more efficient by implementing new features like secure information verification or decentralized scientific computing. Apart from that, it also has strong transaction rates which makes this crypto perfect for conducting financial activities in person with little risk of fraud - all while remaining affordable. 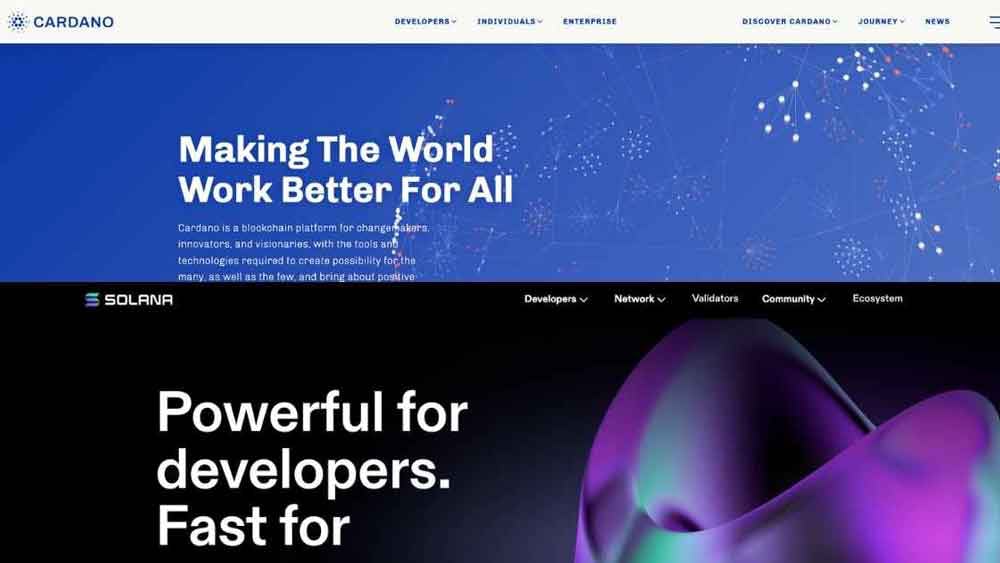 Solana is up 8.22% in the last 24 hours, trading at $103 per coin on CoinMarketCap 8th ranked cryptocurrency exchange with a live market cap of over 33 billion dollars. For those trying to figure out where they can buy some new coins or learn about how it works in general.

Here are five top exchanges that offer SXN/BTC pairing: Binance (the largest), OKX, Altrady, FTX & BitCoke. You just need to know where they're tradeable beforehand since prices change sometimes fast depending upon demand and supply levels within this quickly growing industry

Recently, the Cardano price has been trading at $0.956370 with a 24-hour volume that's equal to over 1 billion dollars. The current CoinMarketCap ranking is #9 and it currently holds a market cap of 32 billion USD. It may not seem like much compared to other coins in this category but you have got to appreciate any opportunity where your investment goes unnoticed by others.‍

10 Key Facts To know About Solana and Cardano

Use Cases of SOL Vs ADA

When it comes to the ADA token, there are many uses for this digital currency. The Cardano platform is built on a foundation of smart contracts and cryptocurrency, but it doesn't stop there. The ADA token can be used as an investment opportunity or stored for emergencies. The reason is, its purpose includes facilitating the transfer of value alongside features such as Bitcoin's unconditional properties.

Hence people all over the world to trade without worrying about currency restrictions imposed by borders. No matter what function you need, your funds are useable. Voting on improvements or funding proposals is possible with Cardano, thanks to ADA tokens. Those who contribute their own security resources get rewarded through delegators' pools.

Investors can earn rewards based on how much commitment and effort was put into maintaining this network's stability. In return for voting power over updates, each user also holds one share out every ten shares available. Since its perfectly dividable so no matter what size wallet someone has there will always be something meaningful at stake.

The famous Solana network is built on the back of its native cryptocurrency, SOL. It has two main uses cases: paying for transactions and securing part approval in staking tokens through Proof-of Stake consensus mechanism with burning SOL. You can also become a validator which gives you more influence over how this whole system operates - think about what might happen if someone had all these powers?

To build smart contracts and create projects on the blockchain, developers need SOL. There are also new use cases for this cryptocurrency through dApps that have been built using Solana. One app in particular is Chainvote. They're developing DeFi voting software which will be used by corporations looking towards effective governance practices with their own tokens.

The cost of a single Solana transaction is now set at $0.00025, although this fluctuates over time according on the amount of transactions. It is governed by the competition for block space on the blockchain, which grows as the volume of traffic increases.

Compared to Ethereum, Solana's transaction fees are 60 thousand times less expensive. Solana's scalability is superior than Ethereum's, which is why this is the case. As Solana's expanding capabilities improve, the company's expenses will come down even more in the future.

Transactions cost an average of between 0.16-0.17 ADA, or about a penny and a half, in the United States. Costs are affected by a number of factors, including the cost of electricity, mining gear capacities and competition among miners. The number of concurrent transactions competing for a block also affects fees.

Which Cryptocurrency Has Margin for Growth: Solana or Cardano?

Even if Cardano's high market capitalization ($70 billion) limits its upside potential, it has a lot of capacity to expand compared to Ethereum, which has very little room to grow. Cardano's spread might be aided by projects like the establishment of a blockchain-based digital ID system for students and teachers in Ethiopia.

Since it has more than 400 projects based on its protocol, Solana's market value ($45 billion) is much less than Cardano's (as of this writing). In the years to come, Solana's growth will be great because of this feature. There is a decentralized exchange (DEX) called SolAPE, which is aimed to appeal to the general people by making it easy to use and enabling a fascinating and rewarding ecosystem.

In the foreseeable future, even if cryptocurrency prices increase and Ethereum continues to struggle from scalability and high transaction costs, Solana and Cardano are well-positioned to become two of the most popular smart contract blockchain protocols.

Solana Vs Cardano: Pros & Cons of Each Platform

Will Cardano or Solana be Accepted as a Payment?

They are both unlikely to be utilized primarily for trading value in the future. When it comes to cryptocurrencies, they are utility tokens rather than coins. Dogecoin and Bitcoin are examples of digital currencies designed to make the process of exchanging value for goods and services simpler. Tokens like Cardano and Solana, which represent the value of the underlying blockchain projects with which they are tied, are more like stocks than utility tokens.

What Will be Worth Cardano or Solana in 2025?

According to internet estimates, the value of Solana will be between $500 and $1,000 by 2025. Investors may conceivably sell their Solana after the staking time finishes, resulting in a decrease in the value of the cryptocurrency.

Nonetheless, Cardano's price forecasts are being viewed with cautious optimism as the cryptocurrency continues to expand at rapid pace. In 2025, the ADA token is expected to be worth anywhere between $3 and $4 per token, according to Wallet Investors.

Conclusion: Which One Is better?

Solana (SOL) and Cardano native asset (ADA) have both soared in value by more than 900 percent in the last year alone. It's obvious that these two blockchains are doing much better than the hundreds of thousands of others in the business. Because of this, there has been an increase in the amount of Google searches for a comparison of the two cards.

When comparing the ecosystems of Cardano and Solana, it is important to understand how they operate and their unique innovative qualities. In the midst of the current blockchain revolution, both projects are using cutting-edge technology. Each company, on the other hand, has its own set of advantages. So, it depends on you to choose the platform according to your convenience.