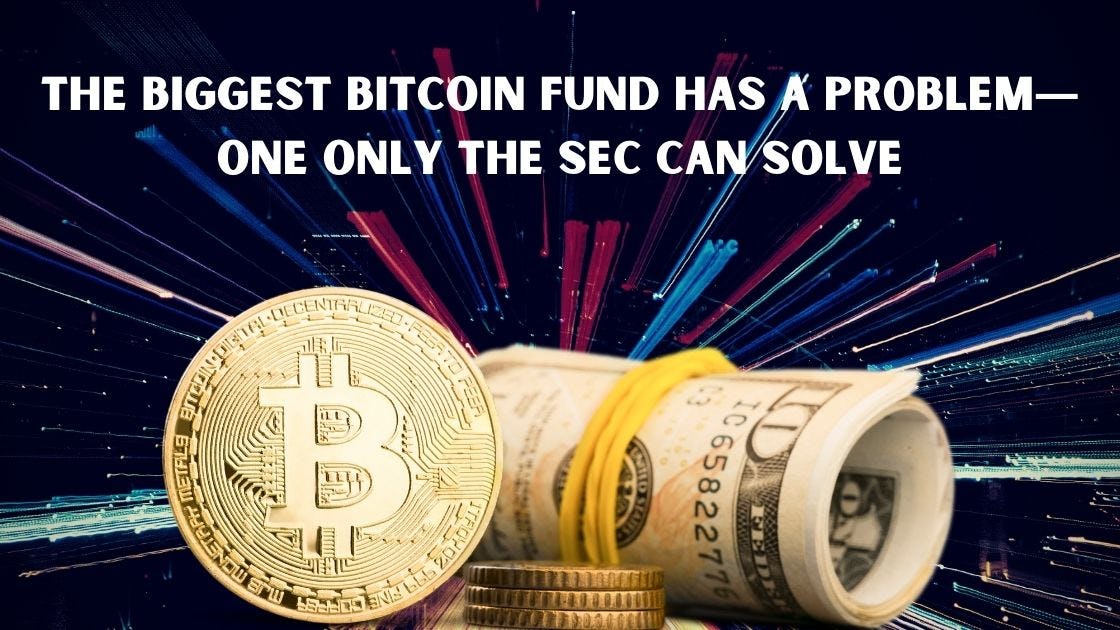 The world’s largest Bitcoin fund is trading at 73 cents on the dollar. That may look like a bargain if you want crypto in your portfolio. But nothing is really free on Wall Street, including a cut-rate deal on Bitcoin.

Holding $26.2 billion in assets, the Grayscale Bitcoin Trust (ticker: GBTC) owns more of the cryptocurrency than any other fund. A private-placement trust that trades like a stock, GBT has become a popular vehicle to access Bitcoin in equity form. Institutional investors like Morgan Stanley and ARK Invest hold it in funds for clients. And it looks cheap, trading at a 27% discount to its net asset value, or NAV. If the share price of GBT matched its NAV, investors would notch a roughly 37% gain, even without a nudge from Bitcoin.

Yet GBT’s discount has persisted since February 2021, causing the fund to underperform Bitcoin sharply. Since then, GBT has declined about 40% on a total return basis, versus a 15% fall in Bitcoin’s price. A 2% expense ratio in GBT has also hurt while owning Bitcoin directly doesn’t incur fees.

Ordinarily, hedge funds sense an arbitrage play in closed-end funds that trade like GBT. They build a stake and pressure the fund sponsor to buy back shares at the NAV. Grayscale’s fund bylaws, however, have deterred activist investors. Grayscale’s parent, Digital Currency Group, has acquired $698 million of GBT at market prices, but that hasn’t closed the gap to NAV.

That leaves one other solution: converting GBT into an exchange-traded fund. In most ETFs, the underlying assets are traded in line with the share price. But winning approval for a Bitcoin ETF runs into a roadblock at the Securities and Exchange Commission.

Grayscale has tried for six years to convert the trust into an ETF. “It’s our No. 1 priority as a firm,” says Grayscale’s CEO Michael Sonnenshein. The company filed a new application last October. Its lawyers argue that since the SEC has approved futures-based ETFs—the ProShares Bitcoin Strategy (BITO) and VanEck Bitcoin Strategy (XBTF)—a spot-based ETF should be next.

“The SEC has created an unfair playing field and forced investors into a futures-based ETF because it’s the only product that exists,” says Sonnenshein.

The agency doesn’t appear to be budging. Under its Democratic chairman, Gary Gensler, the SEC has rejected several Bitcoin ETF applications, including proposals from Fidelity, Valkyrie, and VanEck. Gensler has taken a tough stance on crypto, calling for more regulation of tokens and exchanges and urging Congress to pass laws to rein in what he views as the industry’s “Wild West” practices. The SEC declined to comment on Gensler’s approach to ETFs.

Falling BehindGrayscale Bitcoin Trust's performance has trailed Bitcoin by 36 percentage points as its​share price has lagged far behind its net asset value.Source: Bloomberg
The thrust of the agency’s denials is that the Bitcoin spot market is vulnerable to fraud and price manipulation that could spill over into a spot-based ETF. Bitcoin trades globally on largely unsupervised exchanges and decentralized platforms. Bitcoin futures, in contrast, trade on the Chicago Mercantile Exchange and are monitored by the Commodities Futures Trading Commission. Moreover, U.S. stock exchanges that aim to list a Bitcoin ETF haven’t satisfied the SEC’s requests for “surveillance-sharing agreements” with underlying Bitcoin markets, or made a compelling argument for a waiver, in the SEC’s view.

The SEC has created an unfair playing field and forced investors into a futures-based ETF.

Sonnenshein says he’s confident that the SEC will come around. “It’s a matter of when, not if,” he says. Grayscale has mounted a campaign to pressure the agency, urging investors to send comment letters and racking up more than 2,500 submissions. “I should not be forced into a futures-based ETF because that’s my only choice,” said investor Chris Soignier in one such letter from March 11. “Converting it to an ETF would be better for everyone,” he added, echoing comments from investors who would notch gains in a conversion.

The Securities and Exchange Commission typically sets a 240-day deadline for ETF proposals, making a decision likely by mid-June. SEC Commissioner Hester Peirce, a Republican appointee, has long urged her Democratic colleagues to approve a Bitcoin ETF, arguing in part that the Bitcoin futures market may lead prices in the spot markets, making it tough to manipulate prices for a Bitcoin exchange-traded fund.

Some advisors do like the arbitrage opportunity in GBT. A conversion to an ETF would give GBT owners a significant gain, independent of Bitcoin’s price, says Ric Edelman, founder of the Digital Assets Council of Financial Professionals. “That would be an excellent arbitrage play, but it’s not without risks,” he says, recommending both GBT and Bitcoin directly in a diversified portfolio.

Without a bailout from Washington, however, GBT’s discount probably isn’t going away. And it could widen if demand for the fund continues to erode. Indeed, its 27% discount reflects the fact that GBT’s high expense ratio isn’t competitive against the many cheaper ways to own Bitcoin.

Investors can buy Bitcoin directly, paying a one-time commission through exchanges like Coinbase or apps like PayPal. Other ways to gain exposure include stocks like MicroStrategy (MSTR) or Bitcoin miners like Riot Blockchain (RIOT), Marathon Digital Holdings (MARA), or Core Scientific (CORZ), all of which are like leveraged bets on the crypto. Bitcoin futures ETFs charge less than 1% in annual expense ratios, less than half the fees of GBT.

None of those stocks involve an arbitrage bet on Gensler and the SEC. That would be worth far more than GBT’s fees and would compensate for the fund’s sharp underperformance if it ever pays off.