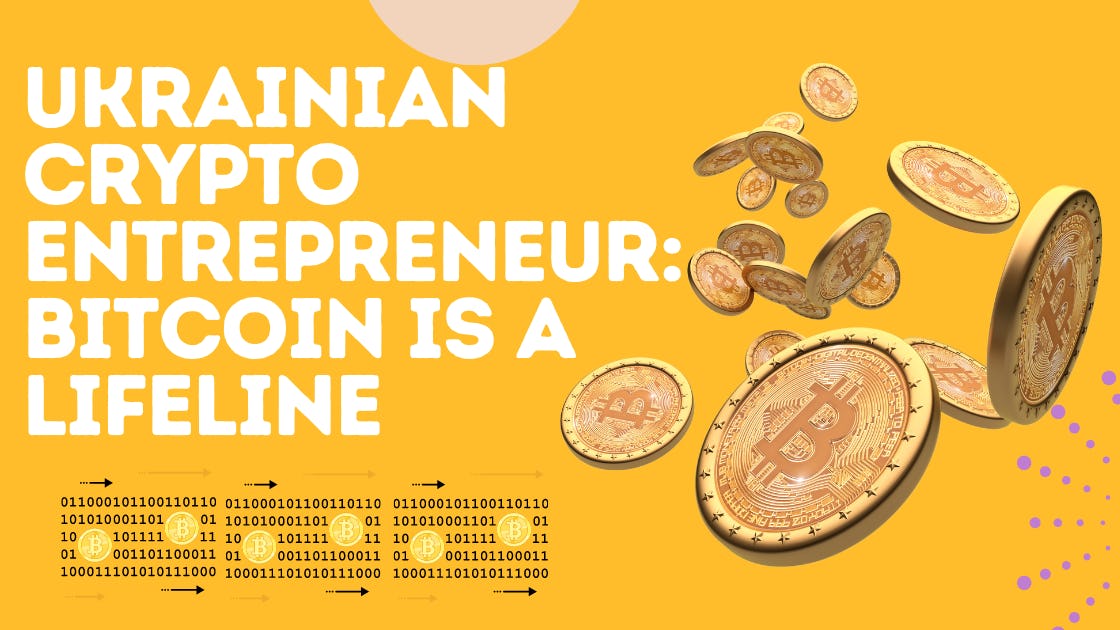 The media presents a macro geopolitical view of how the Russian-Ukrainian War is developing, so it is important to consider the human element of this conflict and how everyday citizens’ lives are being impacted.

Imagine waking up one day to the news that a major neighboring global power has invaded your homeland and you might be called to action, even though you have never held a weapon in your life. This has been the experience of millions of Ukrainian citizens in response to the invasion after President Zelensky ordered a mobilization that banned all men aged 18 to 60 from leaving the country.

I recently had the opportunity to connect with a young crypto entrepreneur, Alex Obchakevich, who lives in the Ukrainian city of Vinnytsia and lent his perspective on the conflict. Obchakevich’s home city is located in west-central Ukraine approximately 145 miles from Kiev. It is one of the cities that has been shelled by Russian forces. The war has significantly slowed Obchakevich’s internet connection, and our interview was conducted asynchronously through text over a period of several days.

“The war has completely changed my life,” Obchakevich said. “In addition to the terrible news, sadness, and air-raid alarms, there is also a slow internet connection that prevents me from working and conducting my business. And probably the saddest part is the uncertainty. Sometimes I sit on my bed at home, the siren sounds outside the window, and I don't feel like doing anything, not running for shelter, not trying to hide somehow. I just sit there and look out the window.”

Obchakevich is 24 and has run online businesses since the age of 17, coming from an impoverished family and needing to drop out of university to earn a living. Recently, he has turned to non-fungible tokens (NFT) and crypto, co-founding the Misfits DAO, which is a collective of artists, collectors, and investors in the NFT space. The decentralized autonomous organization (DAO) provides tools to help artists improve their organic outreach on multiple platforms, including metaverse galleries, Twitter Spaces and Discord channels. The unique art style from the community of artists ranges from fractal and generative art to photography.

Lamenting about the psychological impact of the war, Obchakevich said, “The constant stress is a big drain on normal life. At any moment an air-raid alarm can go off, and everyone needs to pack up quickly and run to a bomb shelter. Although over the last few days, I have not complied, I understand that I am taking a big risk.”

Individuals on both sides are turning to bitcoin (BTC) as a means of storing and transporting their wealth, especially in times of extreme distress. “The perception of cryptocurrencies is positively entrenched in the minds of Ukrainians,” said Obchakevich. “In countries with unstable economies, bitcoin will always attract attention because it allows people to feel financial freedom.” According to a report by Chainalysis, Ukraine is ranked fourth in crypto adoption globally on a per capita basis.

More than 1.7 million Ukrainians have fled the country’s borders since the conflict began, the United Nations says, the “fastest-growing refugee crisis in Europe since World War II,” in the words of UN High Commissioner for Refugees Filippo Grandi. Although some refugees are transferring their funds into crypto as a method of safely storing and transferring their wealth across borders, “this is a small fraction, among only those that have prior experience with crypto,” said Obchakevich. “For the average citizen in a panic, it is easiest to cash in a dollar or euro. However, the frenzy near ATMs has only grown and it is very difficult to withdraw cash now.”

On the Russian side, the ruble has experienced a precipitous crash of approximately 43% since the conflict began. The ruble to bitcoin exchange rate reached a new all-time high of just above 5 million rubles over the same time period, a 40% premium above other bitcoin currency pairs. Although it is unknown whether the price movement is driven by everyday citizens, Russian oligarchs, or fund managers and institutions, there appears to be real demand for bitcoin during this extreme period of geopolitical distress.

Crypto is a neutral technology that can be leveraged by opposing forces. Regardless of the user’s nationality, political affiliation or intentions, she can engage with open source protocols to permissionlessly transmit value around the world. Although Russia is rumored to be investigating the use of crypto rails to circumvent economic sanctions, an act viewed as unpalatable by NATO and other western nations, crypto is also being used to fund efforts supporting the Ukrainian defense. Since the start of Russia’s invasion, almost $100 million worth of crypto has been donated to Ukraine’s government and non-governmental organizations to support Ukraine’s defense.

Beyond the physical barrage of artillery shells and mobilization of troops, the conflict has entered cyberspace. Ukraine Vice Prime Minister Mykhailo Fedorov called for the formation of an “IT Army” to target online Russian interests, resulting in cyberattacks shutting down dozens of Russian websites. These targets included banks, corporations and government websites.

“Mass [distributed denial-of-service] attacks on Russian servers have become an integral part of life for Ukrainian IT workers,” said Obchakevich. “This is the fight of free people against the propaganda of the Russian state. On one side are Ukrainian marketers, hackers and programmers. On the other side are paid Russian hackers who do it for money.

“The difference is that the Ukrainians spend their personal money on advertising and resources to get the truth out, while the Russians spend government money to kill Ukrainian government websites, sow panic among the people and hide the real truth.”

“The funny thing is that the DDoS attacks on Russian servers involve ordinary schoolchildren and students,” Obchakevich continued. “There are thousands of them. These are young people with burning eyes, sitting at their computers around the clock to save their state.”

Obchakevich has not joined the front lines of the Armed Forces of Ukraine, but he is doing his part to contribute to the war effort. He and his business partners donated over $65,000 in crypto to the Ukrainian army, and locally they financially supported refugees from Kiev and eastern Ukraine.

As the Russian-Ukrainian War rages on, the value proposition for bitcoin and crypto in general will only continue to become clearer. For everyday citizens like Obchakevich, bitcoin provides an alternative to the current financial system and serves as an escape valve from oppressive regimes and the ensuing crippling economic conditions brought on by military conflict.

Reflecting on the future, Obchakevich said, “Ukraine is a very large country, and it is unrealistic for Russia to occupy the territory. Russia will not be able to wage a prolonged guerrilla war against Ukraine. I am not a military man, but if I have to take up arms I will take them and defend my homeland and my family.

“I think that cryptocurrencies will play a very important role in the formation of the ‘New Ukraine’ after the war. This will be a digital revolution, a big step on the axis of Web 3 and decentralization.”