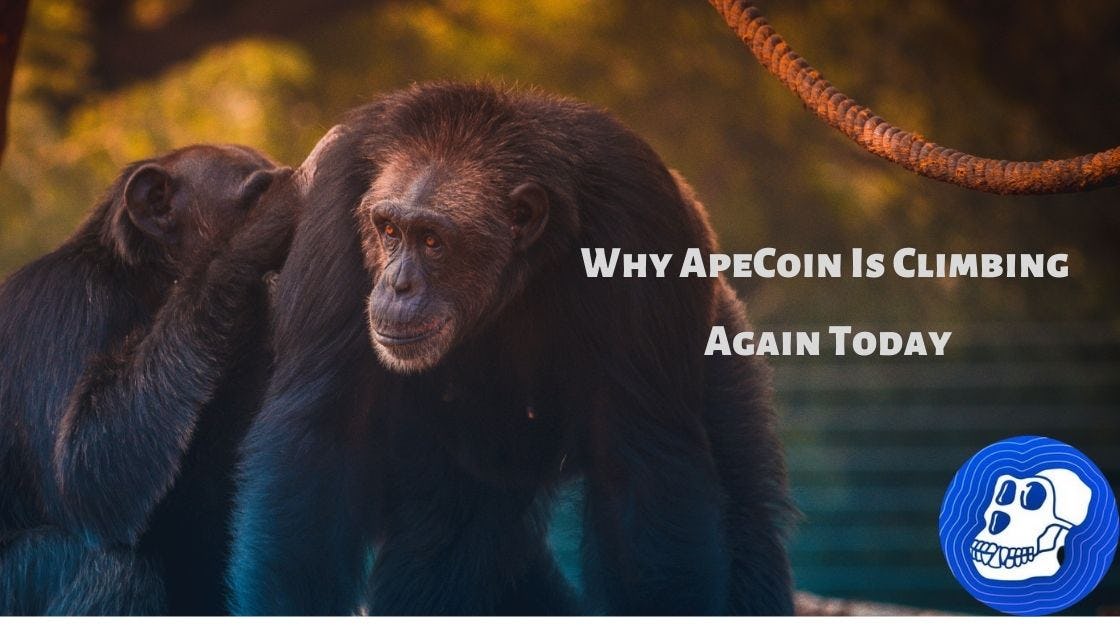 Why ApeCoin Is Climbing Again Today

Why ApeCoin Is Climbing Again Today

Red-hot meme token ApeCoin (CRYPTO: APE) is gaining again today. The cryptocurrency's price was up roughly 6.6% over the previous 24-hour period as of 12:45 p.m. ET Saturday. Meanwhile, Bitcoin was up roughly 1.8%, and Ethereum's Ether ( ETH -2.72% ) token was up roughly 2.5%. These gains added to the massive jump ApeCoin recorded on Friday.

The broader cryptocurrency market is enjoying a day of bullish momentum today, and most top-100 cryptocurrencies are now up over last 24 hours. ApeCoin also appears to be benefiting from hype and continued pricing momentum on the heels of its recent explosive gains.

ApeCoin is an ERC-20 token built on the Ethereum network that was launched by ApeCoin DAO on Thursday. The decentralized autonomous organization (DAO) will be governed by voting power granted through ownership of ApeCoin, but ApeCoin DAO also has a special governing council that includes Reddit co-founder Alexis Ohanian and FTX's gaming and ventures leader Amy Wu.

The token and DAO are also associated with Yuga Labs and its Bored Ape Yacht Club (BAYC) -- an organization that creates and owns non-fungible tokens (NFTs) featuring distinct ape characters. Holders of BAYC NFTs received free ApeCoin upon the cryptocurrency's release, and it will serve as the main token for the BAYC ecosystem.

While the team behind ApeCoin admits that the token is primarily a meme coin, it's also attempting to build an ecosystem around the cryptocurrency. Services that will use the coin include The MonkeyFirm NFT platform, a decentralized exchange, and play-to-earn gaming projects. In the absence of any fresh news for the cryptocurrency or these projects, the token's gains today appear to be primarily driven by market momentum, speculation, and hype.

ApeCoin is now up roughly 1,305% since its launch. The token currently has a market capitalization of roughly $3.8 billion and it ranks as the 35th-largest cryptocurrency by valuation.

With such incredible gains in just a couple of days, ApeCoin is likely primed to see volatile swings in the near term. While the team behind the token seems to be presenting some degree of utility-based cases for owning the cryptocurrency, the primary drivers behind its explosive performance appear to be marketing and hype. That doesn't necessarily mean that ApeCoin won't be able to post more gains from current pricing levels, but the token looks incredibly high risk at present.