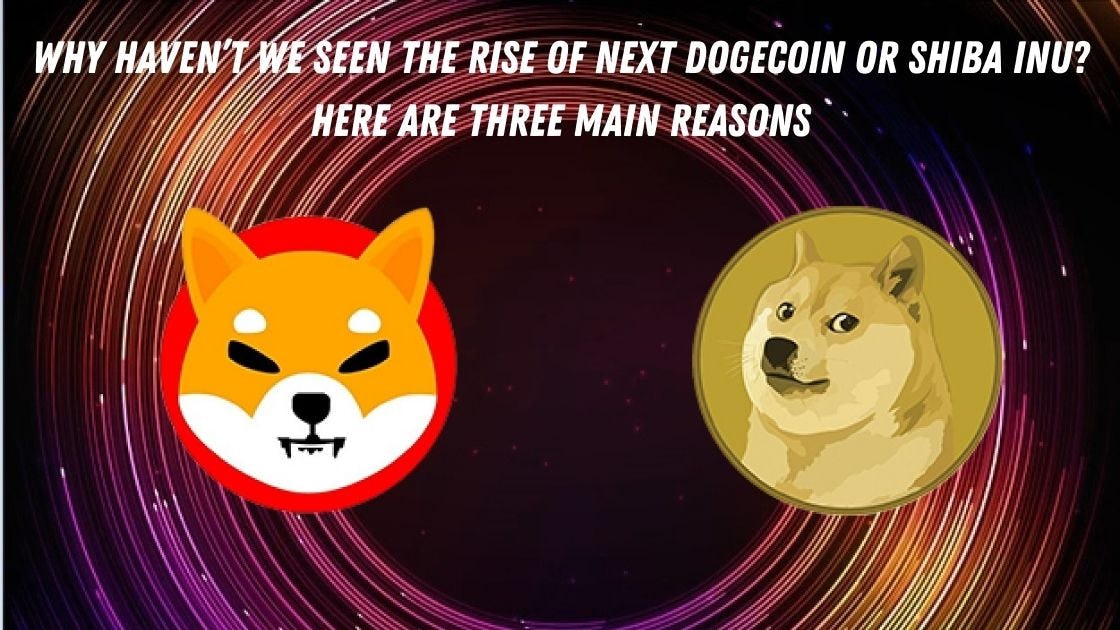 Why haven’t we seen the rise of next Dogecoin or Shiba Inu? Here are three main reasons

Altrady Blog/News/Why haven’t we seen the rise of next Dogecoin or Shiba Inu? Here are three main reasons

Why haven’t we seen the rise of next Dogecoin or Shiba Inu? Here are three main reasons

First Dogecoin. Then Shiba Inu. As we saw the astonishing price surge of some so-called meme tokens, which are cryptocurrencies that emerged from internet memes, many are looking for the next token that could gain as much as over 30,000,000% in one year, like what Shiba Inu did in 2021.

However, it has been several months since we see the rise of any new meme tokens. Meanwhile, Dogecoin is down more than 84% from its all-time high in May, and Shiba Inu declined more than 74% from its record high in November.

The sluggish performance could be partly attributed to the outflow of some retail traders from the crypto market, according to Ben McMillan, founder and chief investment officer at crypto asset manager IDX Digital Assets.

“When you look at the popularity of the meme tokens, or frankly, even the meme stocks, so much of that was just was driven by the kind of excess cash in the system,” McMillan told Distributed Ledger in a phone interview.

Such “excess cash” started to drain as the Federal Reserve in November began tapering its bond purchase program that it started during the Covid-19 pandemic. In addition, the U.S. central bank on Wednesday raised its benchmark interest rate by a quarter percentage point, the first rate hike since 2018, and signaled more to come.

Joel Kruger, FX strategist at LMAX Group, said that the outflow of retail traders also “has a lot to do with leverage trading.”

While institutions are usually able to bear outsized losses that come with the use of leverage, the costs are harder to swallow for retail traders, who “often get caught up in that,” according to Kruger. “They’re overexposed.”

McMillan compared the rise of some meme tokens to the boom in 2017 of initial coin offerings, or ICOs, which busted in 2018, with Facebook FB, Google GOOGL and Twitter TWTR banning ICO advertisements. “A lot of people got burned [from investing in ICOs and learned their lesson. And they’re gun-shy about investing in ICOs again,” McMillan said.

“I wouldn’t be surprised if we see similar behaviors learned this time around – people got burned from Dogecoin or Shiba or GameStop GME for that matter, and are now just more sensitive about what they go into,” according to McMillan.

And it’s not just meme tokens. Facing macro uncertainty, digital asset investors are moving funds from smaller projects to bitcoin and ether, which are “on the more stable end of the spectrum,” according to McMillan.

Bitcoin dominance, which is the ratio between the bitcoin’s market capitalization to the total crypto market cap, rose to a more-than-three-month high of 44% in early March. The number stands at around 43.5% on Thursday.

“Bitcoin seems to be the kind of flight to safety, not surprisingly, within the digital assets ecosystem,” McMillan said.

Read: Bitcoin trading ‘like a Ping-Pong’ match, says investor as Fed kicks off a series of interest rate hikes

On Monday, a proposal to require bitcoin and other proof-of-work cryptocurrencies to adopt more environmentally friendly practices in the European Union failed to win approval by a parliamentary committee. Proof-of-work is a consensus mechanism for crypto that requires high consumption of energy.

The EU’s Economic and Monetary Affairs Committee voted on Monday to advance the Markets in Crypto-assets (MiCA) legislation without a clause that seeks to make all cryptocurrencies “subject to minimum environmental sustainability standards.”

While the clause aims to reduce cryptocurrencies’ environmental costs, it was viewed as threatening to serve as a de facto ban on bitcoin and had received intensive backlash from the crypto community. “Legislating what technologies energy can be used for will push Europe even further back in the innovation race,” Noelle Acheson, head of market insights at crypto broker Genesis trading wrote on Twitter on Saturday.

Jake Chervinsky, head of policy at crypto industry lobbying group Blockchain Association, wrote on Twitter that “if they manage to ban PoW, they’ll come for PoS (proof-of-stake) next, & every other sybil resistance mechanism after that.”

Proof-of-stake is another consensus mechanism that requires less energy consumption. Ethereum is transitioning from proof-of-work to the proof-of-stake mechanism.

Advanced Micro Devices Inc. AMD lost 4% to $110.8 as of Thursday afternoon, while it rose 4% from five trading days ago.

Grayscale Bitcoin Trust GBTC was trading at $27.36, off 0.6% Thursday afternoon.