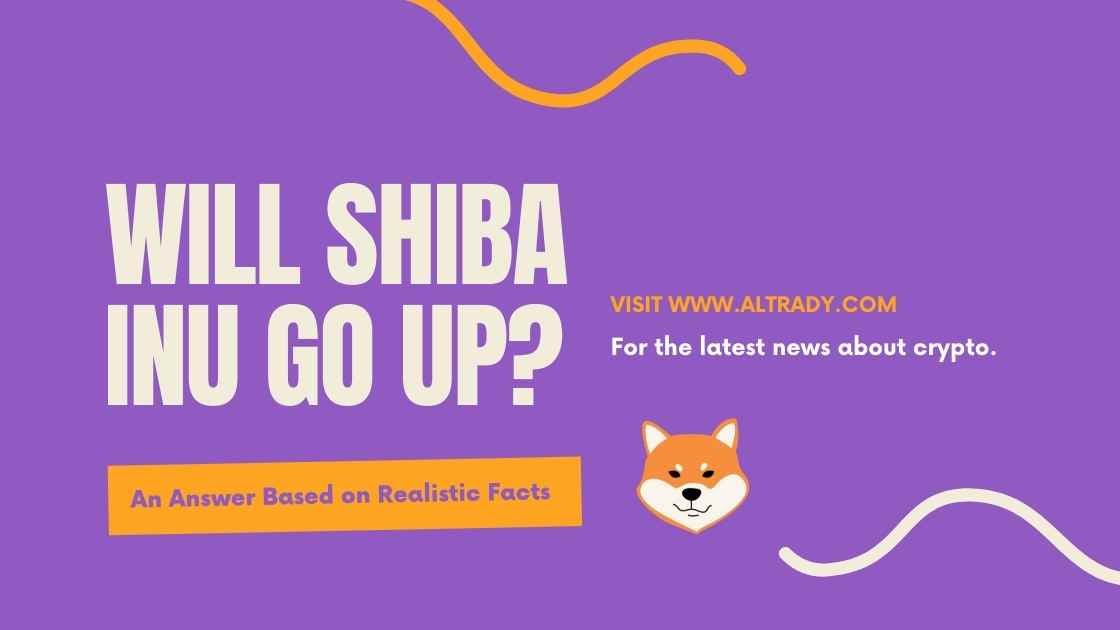 Will Shiba Inu Go Up? An Answer Based on Realistic Facts

Altrady Blog/Cryptocurrency/Will Shiba Inu Go Up? An Answer Based on Realistic Facts

Will Shiba Inu Go Up? An Answer Based on Realistic Facts

After the popularity of Dogecoin in the previous few years, investors are more attracted to the dog-themed coin. After the launch of Shiba Inu, it became instant social media hype, and price charts touched the peak. Unfortunately, the coin can't maintain the momentum and fall back to its worst.

The cycle of ups and downs is still continued, which is raising one question in the investor's mind: Will the Shiba Inu Go Up? To answer this question, one should have a clear analysis of all aspects of this cryptocurrency.

Down the article, we analyzed through different conditions and came to a conclusion. Keep on reading if you want the comprehensive answer and all factors included in this journey.

What Is Shiba Inu?

The Shiba Inu protocol, a decentralized system, makes it possible to send and receive money from anywhere in the globe. An ERC-20 token called Shiba Inu has been launched on the Ethereum platform. The coin was published in August 2020 under the pen name "RYOSHI" by an individual or group going by that name. The project's community members are in charge of keeping tabs on it because of how decentralized it is.

SHIB is the digital currency used to do transactions on the Shiba Inu Protocol. On cryptocurrency exchanges worldwide, Shiba Inu is referred to as a ticker symbol. The Shiba Inu Community had supported this project from its start when its developers made the initiative public and put power in the hands of its followers.

Since its inception, Shiba Inu has aimed to become a part of the Dogecoin market cap's meme-inspired currency phenomenon. When RYOSHI decided to start SHIB, "the brilliant minds behind SHIB had never collaborated before, and we started from zero, with nothing," according to the company's Woof Paper. Those who are inspired by Shiba Inu dogs may join forces to form an international Shiba movement, as the breed's official website encourages.

You can purchase Shiba Inu at these main cryptocurrency exchanges: Binance, OKX, FTX, DigiFinex and Bitget. A community of investors was swayed by the coin's cuteness and the headlines and tweets from individuals like Elon Musk and Vitalik Buterin, which fueled its rapid rise in value. On the Lex Fridman show on June 5, 2021, Vitalik Buterin dismissed reports that he was the creator of Shiba Inu.

5 Past Factors Involved in the Price Going Up of SHIB

In the past year, Shiba Inu's paper value has increased by 250,00,000%. There are a number of things to consider, including the following:

How SHIB Will Gain Price Increment in Future?

Will Shiba Inu Go Up?

To date, this is the first time in history that Shiba Inu investors' books have shown an increase of 44,600,000 percent from a one-year period. Those of you who have read our most recent Shiba Inu study know that we believe Shiba Inu is in a great position and has the potential to gain more than 100 percent of its current value. Even if the price of the dog-themed coin rises by 100%, it will still be a small step toward reaching a $1 market price in the world of cryptocurrencies.

A Ray of Hope in the Darkness

Although we may have enticed you into reading this piece, let's crunch some numbers and talk about what is genuinely achievable for the time being instead. In the future, it is projected that the price of a Shiba Inu will rise dramatically, although not to the level of one dollar.

A market capitalization of 590 trillion dollars would be required to price the dog-themed token at a dollar. Assuming this is true in 2021, its market value must be 650 times bigger than that of Bitcoin and more than 6 times the global gross domestic product.

When we compare Shiba Inu's $16.5 billion valuations to similar ventures with far lower values, the findings are rather interesting. Shiba Inu is a fascinating project. An example of this is EverGrow, which has stellar staff, goals, and intrinsic value of more than $500 million, despite its very small market capitalization. Shiba Inu is 33 times more expensive than EverGrow; however, the majority of experts and analysts say that EverGrow is a significantly better investment. So, what exactly is causing this strange occurrence? Memes and their marketing!

While Shiba has an enormous fan base and spends millions of dollars a year on marketing, EverGrow is more concerned with the fundamentals. EverGrow's statement that it would be the cryptocurrency that earns 10,000 percent earnings in 2022 and that it will exceed Shiba in market value has not been delayed.

But What is the Final Destination?

In spite of the fact that the crypto community is divided on whether Shiba Inu will be able to reach $1 in the near future, the general view is that the SHIB coin will not be able to reach $1 anytime soon. A quick peek at the total number of Shiba Inu tokens in circulation is all it takes to see why the currency will never hit $1.

The price of Shiba Inu would have to rise by 1.8 million percent in the following year in order for it to reach $1 at current prices. If it wants to get to parity with the dollar by the end of 2022, it will need to increase at a rate of more than 150,000 percent per month for the next year or 37,500 percent per month for the next four years. Analysts and investors in the crypto industry believe that the value of Shiba Inu will not rise over $1 this year or in the near future.

1. What Are the Discouraging Factors for SHIB?

There are three major hurdles in raising of SHIB price. If the coin manages to over these issues, there is a huge investment opportunity in the cryptocurrency:

An experiment in community growth with the objective of exceeding Dogecoin in terms of transaction speed is what Shiba Inu is all about. According to Shiba Inu's creators, this may be seen as an attempt to surpass another joke cryptocurrency (Dogecoin).

While other cryptocurrencies, such as Bitcoin and Ethereum, are based on broad acceptance and cutting-edge technology, the Shiba Inu cryptocurrency has yet to attract the attention of serious investors or financial institutions. Traders should avoid cryptocurrencies such as Shiba Inu, according to deVere Group CEO Nigel Green, since they "have no fundamental value" and hence provide the greatest risk to investors.

As compared to Dogecoin, which has benefitted from social media hype produced by known investors and celebrities like Elon Musk, Mark Cuba and even Snoop Dogg, the SHIB token has yet to establish enough momentum to have a significant influence on price movement. Experts at FX Street are worried that if Shiba Inu fails to recover, it will lose the social media exposure it now enjoys, which might be disastrous for the ERC-20 token.

Despite the crypto market's belief that Shiba Inu would never reach $1, the short-term price movement of the coin is particularly optimistic. Analysts and experts have predicted that the price of SHIB coins will rise in 2025. Some of the projections that have been made so far:

Is Shiba Inu Launching a Metaverse?

There are two notable projects around Shiba in particular. "Shiberse," which is expected to debut in 2022, is the first step in the company's plan to join the metaverse. A virtual reality environment known as a metaverse allows users to converse with one another.

Does Shiba Inu have NFTs?

NFTs, or non-fungible tokens, are also becoming more popular among cryptocurrency enthusiasts. It is possible to only have one NFT at a time since they are stored on a blockchain and have a unique identifier. Photos, videos and audio are all viable forms of NFTs. According to Shiba, the firm manufactured 10,000 digitalized "lovable Critters" for sale in October.

For SHIB's continued success, the lively community that has supported it is anticipated to continue to grow. Investing, by its very nature, involves some degree of risk. In the future, you will be able to write off your investment in Shiba Inu Coins.

Conclusion: Should You Invest in SHIB?

The price of Shiba Inu tokens is expected to continue to climb in the future, making it an excellent long-term investment, according to traders, cryptocurrency experts, and investors. As a result of so many variables, no one can anticipate what Shibu Inu will be worth in five or 10 years. SHIB token values might also rebound if they haven't already.

Your risk tolerance and past crypto trading experience are crucial elements to consider when deciding whether or not to invest. It's also a good idea to revisit this post and do some research on Shiba Inu on your own before making a buying decision. If you're new to cryptocurrency trading or just don't have the time to keep up with the markets, you may want to consider hiring a cryptocurrency expert to assist you in your endeavours.